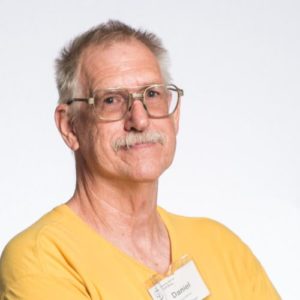 Danny Moritz is familiar with Millersburg and Save & Serve, having always lived just a couple miles south of the village. Danny grew up on a farm and is unafraid of hard work. He comes from a large family and has eight sisters and a brother.

While still attending high school, Danny began to work for Seaman Corporation when it was still located near the Millersburg Airport. When the business moved to Wooster, Danny continued to work for them and did so until his retirement a few years ago.

Not long after retiring, Danny brought his hard-working nature, plus his desire to share a good laugh, when he joined the volunteer ranks at Save & Serve. His first assignment was to learn the rag cutting operation, where he enjoyed being trained by retired family physician, Dr. Paul Roth.

Along with the rag operation, Danny’s responsibilities have grown over the past six years to include driving the box truck, supporting the staff on Thursday evenings when the store is open until 8 p.m., and tackling many of the responsibilities at the Save & Serve warehouse. Danny was trained by and worked with Bruce Glick on the bundling/baling operation at the warehouse.

“Danny likes working alongside other volunteers and the staff, brings a good sense of humor, and is willing to do whatever needs to be done for the sake of the store,” said Eric Raber, store general manager. “He has volunteered in a wide range of ways – anything from maintenance on the electric forklift to cutting buttons off of recycled clothing.”

Danny clearly enjoys volunteering with others at Save & Serve, which includes working with his sister Sue Miller at the warehouse. Together they team up to do much of the bundling/baling.

Danny likes to help, and what a difference he has made.